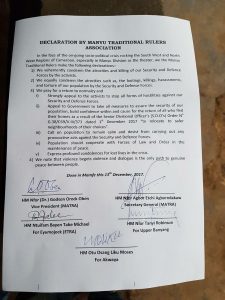 Chiefs are custodians of the tradition and serve as auxiliaries to the administration. Traditional rulers are supposed to be neutral and work to protect their people particularly in times of crises.  However, some Manyu royals have recently lost foresight and have joined the consortium of CPDM crime syndicates in such a way that they prefer serving the Francophone regime than their populace.

Ever since the start of the Southern Cameroons uprising, Anglophone traditional authorities have stayed in their little closet and watch events unfold from a distance. Some of leaders with ties to the Biya Francophone regime are even working against their own people. Cameroon Intelligence Report gathered that it has become difficult for Ambazonians to listen to their Chiefs and Fons.

Southern Cameroonians from the state of Manyu have said that the recent declaration coming from 5 Pharisee Chiefs in Manyu is worthless and has no place in the current Southern Cameroons struggle. In a document handed to Cameroon Intelligence Report earlier today at the entrance to the Mamfe Motor Park, a group loyal to the Interim Government headed by Sisiku Ayuk Tabe pointed out that the Manyu population of the villages represented by the said chiefs does not see them as working to protect their interest.

The 5 native authorities were painted as sellout that have watched the situation to deteriorate and are now seeking big envelopes from the regime in Yaoundé. The majority following of the Interim Government added that the chiefs who signed the declaration were leaders with dubious character whose quest for free money has caused the Francophone dominated administration to minimize the role of the Manyu Chiefs Conference.

“The people of Manyu therefore consider the 13th of December declaration as a manipulation to gain sympathy from the Francophone government” the document stated.  Cameroon Intelligence Report was reliably informed that Chief Moses Liku Osang is presently visiting the USA and could not have signed the document.

By Judith Fon in Mamfe