The French administration and its genocidal slave government in Yaoundé are no longer an item and the Biya Francophone Beti Ewondo regime has accused France of wanting to kick the ruling CPDM crime syndicate out of power.

Early last year, our senior political man, Soter Tarh Agbaw-Ebai reported that the French were closing down on the Biya government. The Minister Counsellor in charge of political affairs at the Cameroon embassy in Paris, France reacted negatively that the Cameroon Intelligence Report story was plain fiction and he challenged the correctness of the report.

We can now reveal that  due to alleged economic deals Biya made in favour of China and Russia at the detriment and in violation of the Colonial slave agreement, the French have now come out openly asking the 85 year old to quit or face severe consequences. 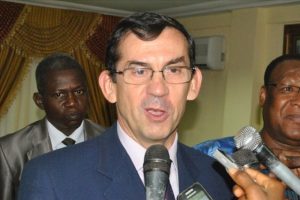 To be sure, La Republique is facing extremely difficult times invoking the colonial treaty in its ongoing genocidal activities in the Southern Cameroons for France to send its military and provide it diplomatic impunity at the international level.

Instead the French Ambassador, Gilles Thibault who masterminded the ousting of the Burkinabe thug, Blaise Campaore chose a private television station in Douala as opposed to the Genocide Propaganda Television, CRTV to state the position of the French Government which is ambivalent suggesting the Southern Cameroons once more may be a bargaining chip for economic exploitation.

Our numerous trips to Paris, France has provided CIR with enough documentation sent from Etoudi accusing France of helping to destabilize Cameroon and provides an insight on how President  Biya and his crime syndicate may have switched allegiance from France for support from China to using the resources of the Southern Cameroons to buy more time.

The evidence made available to us also opens a floodgate of corruption and auctioning of the CDC to French Cameroun economic vampires and SONARA for the benefit of French Cameroun and the consortium of CPDM crime syndicates in power. Nothing for Southern Cameroons in these shoddy deals.

We have not been able to get a proper translation of the Kribi Deep Sea Port file and the Chinese connection. However, we of Cameroon Intelligence Report can now announce to the world that the beginning of the end of Paul Biya is very near with the CPDM crime syndicate accusing France for acting to destabilize its Vassal state.

The scramble and theft of Southern Cameroons sovereignty and resources was declared over on October 1 2017 on the blood of our Martyrs. There is no turning back.

‹ Cameroon: A New Republic Looms Large on the Horizon › Iran says missile production will not stop under any conditions