As Bakweris in the USA prepare to head to the polls to elect members of the Fako executive council, the candidates have sent out their final campaign messages. Mola Billy Esele and Mola Nathaniel Mosaso have urged voters to ensure a “safe Fako Diaspora and a Safe Fako constituency back home” for future generations.

After a seemingly never-ending campaign, Fako’s presidential race is slowly but surely coming to an end leaving the decision in the hands of the registered members of the Bakweri family meeting in the US.

A victory for Mola Billy Esele from a humble background would make him Fako’s first pro health elected president since the organization was created decades ago. The Fako presidency is largely ceremonial. However, in the event of a Mola Nathaniel Mosaso’s victory, the Bakweris will have a candidate who not only dreams but translates his dreams into reality.

In light of the upcoming vote in the US characterized by accusations and counter accusations, a spokeswoman for the Mola Mosaso Campaign, Iya Agnes Nduma Mbwaye(seen here on photo attached to this report) was quoted recently as saying Mola Mosaso has the best plan to move Fako forward.  Polls suggest that Fako enthusiast Mola Billy Esele and the dream leader Mola Nathaniel Mosaso are neck and neck. 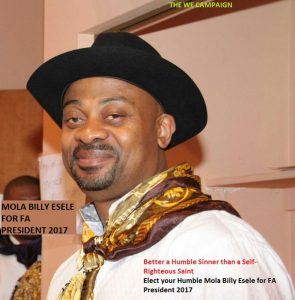 Invitees are expected from across the globe and particular from Fako division in Cameroon. The occasion would be graced by the renowned Sir Tata Kinge. The Saturday 24th June 2017 jamboree will be highlighted by the election of the next executive to man the affairs of Fako People in Uncle Sam’s land for the next two years.