Sporadic clashes erupted in Manyu Division between French Cameroun government forces and Ambazonian militants, a day after the French Cameroun Head of State President Biya declared “total war” over the Federal Republic of Ambazonia and at least one airstrike hit the old village of Otu that is the scene of the fierce battle.

A plume of smoke rose into the air from strike carried out in Tinta in Akawaya as gun shots rained on La Republique’s military positions.  Heavy gunfire was heard in Egbekaw village towards the River Manyu in Mamfe, the chief town in the Manyu State.

The developments underscored the dangers still posed by the French Cameroun army immediately the interim President of the Federal Republic of Ambazonia Sisiku Ayuk Tabe announced the formation of Ambazonia’s first cabinet after 56 years of total and complete marginalization.

The Francophone Senior Divisional Officer for the Manyu constituency called on Ambazonians via a press release to evacuate their villages.  Cameroon Intelligence Report correspondent in Manyu said the French Cameroun military campaign in Manyu has created a “civilian catastrophe,” with the Francophone soldiers carrying out forced displacement, summary killings and using civilians as human shields.

A senior aide to the President of the Federal Republic of Ambazonia told CIR late yesterday that the scale and gravity of the loss of civilian lives on day one of the military operation by the French Cameroun army must immediately be publicly acknowledged at the highest levels of government in CEMAC and ECOWAS including the UN and European Union.

A traditional ruler, who recently alluded to the brutality of the French Cameroun troops, also opined that Ambazonians will achieve victory “by the blood of our martyrs.” The massive deployment of Francophone troops to Southern Cameroons by the 84 year-old head of state marks a “turning point” in the history of the United Republic of Cameroon.

The French Cameroun administrative officials continue to subject the people of the Federal Republic of Amabzonia to “daily horrors” in villages in Manyu. The SDO’s press release justifies forced evictions in the Manyu State by French Cameroun security forces and their allies which is leaving deep scars on the Ambazonian society. 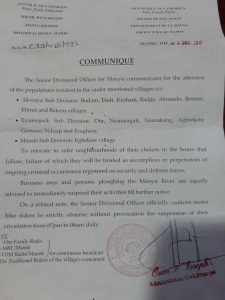 In Mamfe Central, local elites warned that there can never be a military solution to the crisis in Ambazonia. They have urged the Biya Francophone government to review its policies for dealing with the crisis to “avoid previous mistakes that led to the emergence” of armed conflicts in many other African countries.

The Biya government needs to work on “removing fears of marginalization and terrorism affiliation in Southern Cameroons,” said a pro Biya supporter and militant of the ruling CPDM party. Thousands of Southern Cameroons civilians are estimated to have fled to Nigeria and hundreds have been killed in the fight in Manyu. Our toll does not include those still believed buried in mass graves.

The French Cameroun army does not release official casualty numbers for soldiers killed in combat. But at the time of filing this report, the bodies of 12 soldiers were brought to the mortuary in the Mamfe General Hospital. A spokesperson for the Southern Cameroons fighters has been quoted as saying Ambazonian militants will continue to attack French Cameroun soldiers purportedly killing and wounding many and seizing weapons and ammunition.

The corrupt UN Special Representative for Central Africa Sub Region with his timid and complicit statements of the France-Afrique neocolonial is yet to issue a statement. François Louncény Fall of Guinea is an avowed paid agent of French Cameroun aimed at whitewashing the genocide of Southern Cameroons by attempting to make victims out of French Cameroun criminal genocide executioners, it is safe under these circumstances to conclude that  the infiltration of the international system over the years rather than dissuade, encouraged impunity.