The killings in Cameroon’s two English-speaking regions have continued as government forces and separatist fighters clash over the control of the resource-rich Southern Cameroons.

The fighting and killing are increasing and spreading amid a resurgence of a violent and insidious enemy – COVID-19 – that is spreading death and destruction across the country.

Government forces have been pursuing their campaign of intimidation and destruction across the two English-speaking regions, making it impossible for a return to normalcy in a region that has been ruined due to the fighting. These days, it is normal for civilians to be arrested for the flimsiest excuse. They are made to pay huge sums of money at the military barracks or police station. The socio-political crisis has transformed the people of Southern Cameroons into a sure source of income for the military.

The death of a Buea-based pidgin news journalist, Samuel Wazizi, is proof of the atrocities that are being committed by government forces. Samuel Wazizi was declared dead on June 2, 2020, after having been held incommunicado for close to 300 days.

The news of his death was made public by Equinox TV, a local French Cameroon network that has been covering the fighting throughout the crisis. The network revealed that the Buea-based journalist died on August 17, 2019, in military custody, 15 days after he was arrested in Muea, a small town located some 2 km from Buea. Mr. Wazizi was arrested by Buea police and illegally handed over to the military who transferred him to Yaounde, where he was allegedly killed by Cameroonian authorities.

As Cameroonians are still digesting the bad news about the death of Mr. Wazizi, new reports are emerging that security agents arrested Mr. Amba Denis in Tombel in the Southwest region because his name rhymed with the word Ambazonia. The behavior of army soldiers in the region is causing apprehension and revenge, making it hard for the situation to be brought under control even as some senior government officials like the country’s Prime Minister, Dion Ngute, are working behind the scenes for a negotiated peace settlement with the separatists.

Mr. Ngute, like many of his ministers, hold that an outright victory is an impossibility, but some regime hawks who are enriching themselves through the massacres and misery of Southern Cameroonians are still insisting that victory can be obtained in the battlefield.

Still in Tombel, last week, soldiers shot and wounded a widow in a raid many say was unnecessary. Elizabeth Sume, the victim of the military’s recklessness, had lost her husband last year and she has been battling diabetes for some time. The military’s shooting of her legs has only made matters worse for a widow whose financial situation is at best precarious.

Besides the killing, the military is also being accused of other atrocities which are hardly investigated by the country’s authorities. The government’s silence over these atrocities appears to be its approval of these crimes committed against civilians who only want to live in peace. There are many incidents involving the military in the two English-speaking regions where army soldiers are alleged to use force to extort money from the already impoverished civilian population.

The most embarrassing of all was when members of the Rapid Intervention Battalion were caught on CCTV in an armed robbery in the two English-speaking regions. A few months ago, some Gendarmerie officers were arrested for kidnapping a man in Buea and calling on the man’s family for a 2-million francs ransom. The money transfer number was traced by the police and the Gendarmerie officers were arrested, though there are no reports on whether they had been prosecuted for their crime.

The military’s atrocities are numerous and shocking. A few days ago, the small town of Bamessing in the North West Region witnessed military terror at its best. Civilians had to run into the bushes for their dear lives, as army soldiers showed up where there was a local meeting. Speaking to Cameroon Concord News Group’s correspondent in the Northwest region, a local of Bamessing said that the soldiers went to Mbulue, a neighborhood where the meeting was holding.

When the locals saw the military, they all fled in different directions for their lives. The irresponsible military then went ahead to collect the money (about CFAF 50,000) the population had contributed for community development projects. The soldiers also made away with meeting books and 9 motor bikes. Some natives of the town have fled to Yaounde and have vowed not to return due to military violence.

But it is not only the country’s military that is involved in atrocities and killings. Many armed groups have emerged, and some rogue elements are making the most of the situation to meet their financial and economic needs. Like soldiers, many armed groups are also extorting money from the population. In many cases, innocent people are kidnapped and taken to the jungle. They are only released when their families pay the ransom requested by the gunmen.

There have been many reports of scores-settling in the two English-speaking regions. Little disputes no longer get settled amicably these days. Those with guns have become judges and their justice system leaves much to be desired. Their penalties sometimes cause an entire family to migrate.

Recently, a group of armed men killed some five people in Eshobi, a village some 8 km from Mamfe in the Southwest region on the grounds that the five men had betrayed the rebellion. The armed men said those killed had revealed information to the military, making it possible for the military to kill one of their fighters. The region is today awash with weapons and law and order have simply crumbled. Many chiefs who used to settle minor disputes have fled their villages, as armed men keep threatening to kill them.

The chiefs are usually accused of supporting the government and the armed men are young and do not have any self-control. They are trigger-happy and never reluctant to kill for little amounts of money. Most villages have been deserted and schools in the rural areas of the two regions have been closed now for four years.

Many soldiers have been killed by armed men and in many cases in very gruesome circumstances. Yesterday, a military truck was blown up by separatist forces as a convoy of trucks made its way to Bui for a bloody military operation. It is being reported that the military took huge casualties. 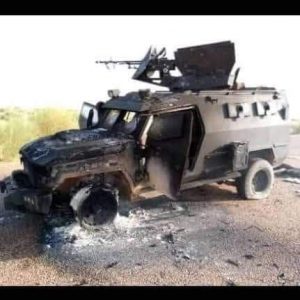 Due to the ongoing killings in the two English-speaking regions of the country, a group of Nobel laureates has urged the government of Cameroon and separatist forces to cease fighting and let health workers tackle the coronavirus pandemic.

The Global Campaign for Peace and Justice in Cameroon on Monday asked the African Union, the Commonwealth and La Francophonie to urge the government of Cameroon to call for a “COVID-19 ceasefire.

The Southern Cameroons crisis has been a huge concern to the international community, especially as the country’s government does not seem to favor a peaceful resolution of a conflict that has hurt the country’s economy. It is hoped that with the intervention of the United Nations and foreign dignitaries, the government will reconsider its decision and will work towards a peaceful resolution.