For those who are familiar with the expression “wata na wata” you probably think of it as a historical Southern Cameroons grievance over events that unfolded some 57 years ago. That was the time when the French government facilitated the creation of the so-called Federal Republic of Cameroon and later transformed it into the United Republic of Cameroon.

The French Commissioner to French Cameroun, Roland Pre ousted Andre Marie Mbida as Prime Minister of French Cameroun and replaced him with a man the world came to know as President Ahmadou Ahidjo. Ahidjo was then accorded the task of assimilating British Southern Cameroons.

There was a feeling of considerable slaughter of Southern Cameroonians during the Bamenda Preparatory Conference in 1961 and it has been hard for Southern Cameroons political commentators to explain why Dr Emmanuel Lifafe Endeley was absent in Bamenda. Endeley wrote a letter to the Bamenda Preparatory Conference which was never read but in that document, he noted that his feeling about the Plebiscite was more of a “massacre” than anything else.

When all was said and done, the Federal Republic of Cameroon was established after the Foumban Conference and on May 20th 1972, French Cameroun started the process of seizing and destroying everything that is Southern Cameroons. Since then, the people of Southern Cameroons lost everything including the name of the port city of Victoria that was changed to Limbe by French Cameroun political elites with the support of the disgraced Prime Minister Ephraim Inoni.

As the Biya Francophone government continues to celebrate its military superiority over Ambazonia Self-Defense Forces, Southern Cameroonians are weeping over the failure of leadership in the Interim Government caused by the abduction of President Sisiku Ayuk Tabe and his top aides in Abuja, Nigeria.

To resolve this conflict, the Southern Cameroons leader, Sisiku Ayuk Tabe made an extraordinary gesture despite the enormity of the injustice imposed on him, his aides and the Ambazonian people for over 57 years. President Sisiku Ayuk Tabe requested for an all inclusive dialogue to be hosted in a foreign country and supervise by the United Nations. 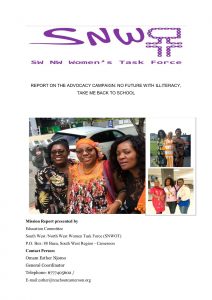 So here we are, more than three years after the Southern Cameroons revolution started, Ambazonians are back at square one with some struggling on social media to defend a Pastor-Leader who wasted their hard earned money for his self-aggrandizement with a few pretending to host an Ambazonia Cultural Festival in London on the 17th of August at a time when much of the international community has resigned itself to tepid commentary instead of meaningful action against the Biya Francophone regime. 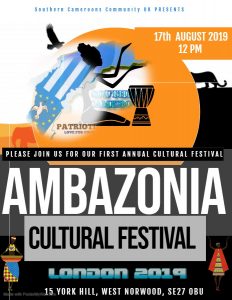 Biya and his French Cameroun military with support from the French government and French speaking African diplomats have barred Southern Cameroonians from every avenue towards dignity and freedom: No right to reside in a viable environment, no right to return to their original homes from Nigeria or from Europe and America, and live bullets awaits those who mount any effective protest, even when they’re unarmed and non-violent.

But no matter how bleak the reality looks today in Ground Zero and in the Southern Cameroons Interim Government with Sako  Ikome and Chris Anu now appearing as fifth citizens (Fifth citizens were Europeans who cooperated with the Nazi when the German army invaded their respective countries), in terms of policy and on  Ground Zero including the work of Vice President Dabney Yerima, there is a counter-reality we Ambazonians must recognise: Southern Cameroonian aspiration for freedom is mightier than any army that stands in its way. French Cameroun bullying and coercion over the past 3 years have not broken the spirit of the Southern Cameroons revolution, and another 57 years won’t either.

The Southern Cameroons resistance for justice, which envisions the kind of equality and prosperity that protects the future of all Ambazonians, will continue until we bring this 57 years long “wata na wata” battle to an end, once and for all.

‹ We’re ready for battle: Venezuela’s President Maduro challenges Trump › Time For SDF Militants To Remove This Specialist For Own Goals From The Party!