The defense and security forces mobilized on March 13, 2017 to protect the passage of the caravan of the tour of Cameroon did not have much work. From the Kumba toll at the entrance to the town of Limbe, very few people watched as the predominantly local and international French speaking cyclists did their thing.

The mood at the arrival point in Limbe seen here on photo was completely and totally deserted.  Yet the Francophone authorities had pulled out their heavy artillery to deal with any eventuality. French speaking soldiers armed with assault rifles were stationed after every 300 meters with police reinforcement.

Our Yaounde informant hinted that the government had mobilized a military aircraft ready to take off at any moment for the South West. The strong militarized presence, however, did not serve much, since the Southern Cameroonians boycotted the race. 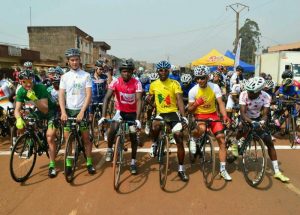