Israeli Prime Minister Benjamin Netanyahu warned Tehran on Sunday over aggressions by what he called Iran and its “proxies” in Syria, while showing what he claimed was a piece of an Iranian drone shot down in Israeli airspace.

Saying he had “a message to the tyrants of Tehran” during a speech at the Munich Security Conference, he warned: “Do not test Israel’s resolve.”

He brandished a rectangular piece of dark green metal which he called “a piece of that Iranian drone, or what’s left of it, after we shot it down.”

Israel has said it shot down the drone on February 10 after it entered the country from Syria, and responded with a raid on what it said was the Iranian control systems for the craft in Syria.

It marked the first time Israel publicly acknowledged hitting Iranian targets in Syria since the 2011 start of the civil war there.

During the strikes, one of Israel’s F-16 fighter jets was shot down, believed to be the first loss of an Israeli plane in combat since 1982.

Calling Iran’s Foreign Minister Mohammad Javad Zarif the “smooth-talking mouthpiece of Iran’s regime,” Netanyahu said: “Mr Zarif, do you recognise this? You should, it’s yours.”

Again referring to Zarif, who is scheduled to speak later in Munich, the Israeli leader said: “No doubt Mr Zarif will brazenly deny Iran’s involvement in Syria.”

“He lies with eloquence.”

The Israeli military has claimed the drone was a copy of a US model captured by Iran in 2011, based on an analysis of the drone’s debris.

Tensions between the two countries have been building in recent months, with Israel fearing that Tehran is trying to establish a permanent presence in Syria as part of an effort to become a greater regional power in the Middle East.

At the same time, Syria appears to feel it now has the upper hand in the civil war and is more emboldened to stop Israeli air raids inside the country, analysts say.

But Netanyahu said Sunday that Israel would not let Iran obtain a permanent foothold in its northern neighbour.

“Through its proxies Shiite militias in Iraq, the Huthis in Yemen, Hezbollah in Lebanon, Hamas in Gaza Iran is devouring huge swathes of the Middle East,” he said.

“Israel will not allow Iran’s regime to put a noose of terror around our neck,” he added.

“We will act without hesitation to defend ourselves. And we will act if necessary not just against Iran’s proxies that are attacking us, but against Iran itself.”

But he stressed that Israel was not the enemy of the Iranian people, and offered his condolences to the families of the 66 people killed in an Iranian plane crash Sunday.

“We have no quarrel with the people of Iran, only with the regime that torments them,” Netanyahu said. 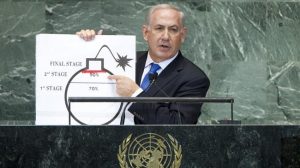 “Clearly the focus of Mr. Netanyahu was not the Israeli-Palestinian issue, it was Iran and also the budding relationship between Israel and the Arab states,” France 24’s Marc Perelman said from the Munich Security Conference after the speech. “He said it was becoming a new relationship, Israel was being seen now in Arab capitals as an ally against Iran,” Perelman added.