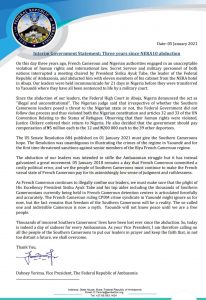 On this day three years ago, French Cameroun and Nigerian authorities engaged in an unacceptable violation of human rights and international law. Secret Service and military personnel of both nations interrupted a meeting chaired by President SisikuAyukTabe, the leader of the Federal Republic of Ambazonia, and abducted him with eleven members of his cabinet from the NERA hotel in Abuja. Our leaders were held incommunicado for 21 days in Nigeria before they were transferred to Yaoundé where they have all been sentenced to life by a military court.

Since the abduction of our leaders, the Federal High Court in Abuja, Nigeria denounced the act as “illegal and unconstitutional”. The Nigerian judge said that irrespective of whether the Southern Cameroons leaders posed a threat to the Nigerian state or not, the Federal Government did not follow due process and thus violated both the Nigerian constitution and articles 32 and 33 of the UN Convention Relating to the Status of Refugees. Observing that their human rights were violated, Justice Chikere ordered their return to Nigeria. He also decided that the government should pay compensation of ₦5 million each to the 12 and ₦200 000 each to the 39 other deportees.

The US Senate Resolution 684 published on 01 January 2021 must give the Southern Cameroons hope. The Resolution was unambiguous in illustrating the crimes of the regime in Yaoundé and for the first time threatened sanctions against senior members of the Biya French Cameroun regime.

The abduction of our leaders was intended to stifle the Ambazonian struggle but it has instead galvanized a great movement. 05 January 2018 remains a day that French Cameroun committed a costly political error, and we the people of Southern Cameroons must continue to make the French vassal state of French Cameroun pay for its astonishingly low sense of judgment and ruthlessness.

As French Cameroun continues to illegally confine our leaders, we must make sure that the plight of His Excellency President Sisiku Ayuk Tabe and his top aides including the thousands of Southern Cameroonians currently being held in French Cameroun detention centers is articulated forcefully and accurately. The French Cameroun ruling CPDM crime syndicate in Yaoundé might ignore us for now, but the fact remains that freedom of the Southern Cameroons will be a reality. The so-called one and indivisible Cameroun is now a myth.  Yaoundé will not know peace until we are a free people.

Thousands of innocent Southern Cameroons’ lives have been lost ever since the abduction. So, today is indeed a day of sadness for every Ambazonian. As your Vice President, I am therefore calling on all the people of Southern Cameroons to put our leaders in prayer and keep the faith that, in not too distant a future, we shall overcome.

Southern Cameroons Crisis: Government must return to the negotiating table!