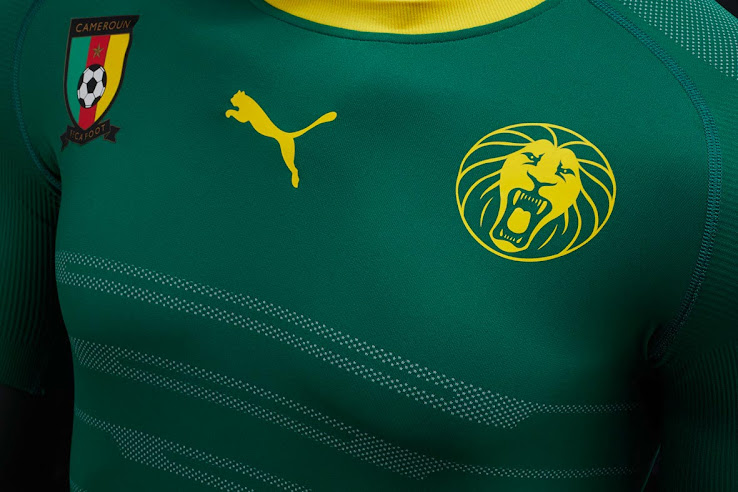 In terms of technology, the Cameroon 2016 kit is based on Puma’s new evoKNIT material. Designed to offer improved comfort and cooling, the new Puma evoKNIT kit tech has a similar ring to it as Nike’s Vapor AeroSwift template, unveiled a few months ago. Anyway, the new Puma evoKNIT Cameroon jersey is the first football shirt ever to boast a seamless torso construction. 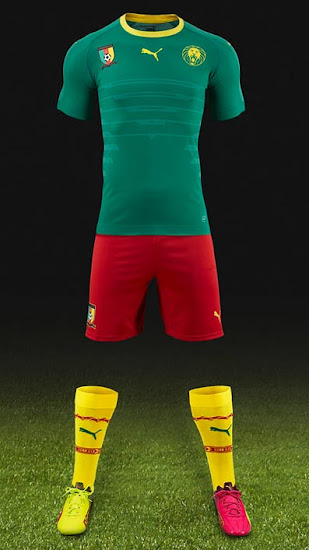 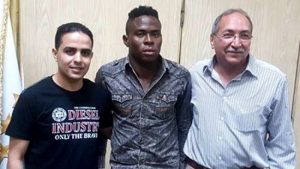 The team of the Spanish Primera División, commonly known as La Liga, retired professional footballers has delivered an outstanding performance against Iran’s football stars of the past in a charity match played in the Iranian capital city of Tehran.

The proceeds of the fixture went to the Iranian society that supports Multiple Sclerosis (MS) patients. Iran stars’ team started the game in an energetic fashion, and sought to score the first goal. It was finally 37-year-old Rasoul Khatibi, who was offered a marvelous opportunity in the 4th minute to put the ball at the back of the opposite side’s net. He, however, squandered the one-on-one chance and did not manage to poke the goal.

In the 26th minute, Morientes Sánchez picked up a long pass from teammate Mendieta Zabala. Mendieta Zabala did not fire the ball into Iran’s empty net, and let Luis Javier García Sanz accomplish the task and put former La Liga stars 1-0 ahead.

The Persians were awarded a free kick in the 52nd minute. Esmaeil Halali took a shot at former La Liga icons’ goal, but it went wide. Gholamreza Enayati side-footed into the back of the net in the 57th minute, and scored Iran’s opener. In the 70th minute, Spanish retired footballer Albert Luque Martos grabbed the ball and struck the fourth goal for his side.

Usain Bolt to be stripped of one of his medals

Usain Bolt has insisted his legacy to athletics would survive unscathed even if former relay team mate Nesta Carter is found guilty of doping at the 2008 Beijing Olympics.

Sprint king Bolt achieved a ‘triple-triple’ by anchoring Jamaica to a runaway gold in Friday’s 4x100m final, but was then asked about the possibility of being stripped of one of his medals.

Reports surrounding Carter surfaced in the months leading up to the Rio Games, claiming that in re-tests of frozen blood and urine samples from Beijing, Carter, who ran the 4x100m relay with Bolt, tested positive for a banned substance.

Issa Hayatou, has been appointed honorary member of the International Olympic Committee. The decision was made public on Sunday, August 21, 2016.

Hayatou who is the current president of the Confederation of African Football (CAF), was a member of the OIC since 2001.

He was FIFA acting president from the 9th of October 2015 to the 26th of February 2016 following the suspension of the great Sepp Blatter.

Cameroon’s chances of obtaining a medal at the on-going Rio Olympic Games have been slimmed with the elimination of Rebecca Ndolo Muambo, wrestler in the women’s 48 kg category.

Her elimination leaves Cameroon with only two athletes in the competition: Ali Anabelle-Laure and Essiombe Tiako. They both compete on Thursday 18th August 2016.

FIFA: Former President Joao Havelange has died at the age of 100

The Brazilian was predecessor to Sepp Blatter at world football’s governing body, serving from 1974 to 1998. He resigned as FIFA”s honorary president  in April 2013 following an investigation into bribery allegations and was admitted to hospital  the following year with a lung infection. He was an International Olympic Committee (IOC) member from 1963 until 2011, resigning because of ill health. Havelange represented Brazil in swimming at the 1936 Olympics – the year he qualified as a lawyer – before his election to the IOC.

As Fifa president he led the World Cup’s expansion from 16 to 32 teams, with six competitions held under his tenure. However, his career was also mired in controversy over bribery allegations. In 2010, a BBC Panorama programme accused Havelange and son-in-law Ricardo Teixeira of taking millions of dollars in bribes from Swiss marketing agency International Sport and Leisure (ISL) to retain the company as Fifa’s sole official marketer.

Joao Havelange hands the World Cup trophy to Mexico president Miguel de la Madrid to present to Argentina captain Diego Maradona at the 1986 final His resignation from the IOC five years ago avoided an investigation into the ISL allegations, which Havelange had denied. In 2012, Teixeira stepped down as head of the Brazilian football federation, a position he filled for 23 years, and resigned from the 2014 World Cup organising committee after coming under pressure over corruption allegations, which he also denied.

As well as swimming at the 1936 Olympics, Havelange was part of the Brazilian water polo team at the 1952 Helsinki Games and was chef de mission for the Brazilian delegation at the 1956 Olympics in Melbourne. And it was as a sports administrator, particularly in football, that Havelange made his mark.

He embarked on a career which began as president of the Metropolitan Swimming Federation in Brazil. He also became a member of the Brazilian Olympic Committee and joined the International Cycling Union in 1958. After becoming vice-president of the Brazilian Sports Confederation, he served as president from 1958 to 1973, before he became the most powerful man in world football. In 1974 he succeeded Britain’s Sir Stanley Rous to be elected Fifa president, marshalling support among those unhappy at the perceived European domination of the world governing body.

An imposing figure, with piercing blue eyes, his astuteness as a politician and his adeptness at retaining power enabled him to hold the Fifa presidency for 24 years until being succeeded by Blatter in 1998. When Havelange was elected president, Fifa’s Zurich headquarters housed just 12 staff members. But that figure increased almost tenfold over the next two decades as Fifa’s organisational responsibilities and commercial interests grew.

Increasing the size of the World Cup to 32 teams gave countries from Asia, Oceania and Africa the chance to shine on the world stage, Cameroon becoming the first African country to reach the quarter-finals in 1990. It was Havelange who launched a wave of new tournaments, notably the world championships at Under-17 and Under-20 level in the late 1980s and the Fifa Confederations Cup and Fifa Women’s World Cup at the start of the 1990s.

A man who died after he was shot by police with a Taser gun has been named locally as ex-Aston Villa footballer Dalian Atkinson. Officers were called to a home in Meadow Close, Telford, Shrophire in the early hours of this morning amid concerns “for the safety of an individual”. West Mercia Police said the 48-year-old man was given medical treatment after being hit by a stun gun but died around 90 minutes later. An unnamed neighbour said: “I had known him since he was a little boy, he was a famous footballer at one time. He was friendly, he had no trouble that I know of.”

An ambulance spokesman said while the man was being taken to Princess Royal Hospital his condition deteriorated and he suffered a cardiac arrest. He was pronounced dead shortly after arriving at the medical facility. Atkinson’s wonder goal against Wimbledon during a 3-2 win in October 1992 was named Match of the Day’s goal of the season.

The police use of Tasers is intended as a non-lethal weapon. The incident has now been referred to the Independent Police Complaints Commission (IPCC). Police said in a statement: “West Mercia Police can confirm that officers responded to a report for the concern for the safety of an individual at approximately 1.30am this morning at an address in Telford.

“Upon arrival Taser was deployed and a 48-year-old man, who subsequently received medical attention, was pronounced dead at approximately 3am. “West Mercia Police are unable to comment any further as the incident has been referred to the Independent Police Complaints Commission (IPCC) as is normal procedure, and will assist the IPCC with their inquiries.”

A West Midlands Ambulance Service spokesman said: “We were called by West Mercia Police to an address in Meadow Close in the Trench area of Telford at about 1.45am this morning. “An ambulance was dispatched and upon arrival found a man who had been Tasered. “As he was being conveyed to Princess Royal Hospital, his condition deteriorated and he went into cardiac arrest. “Despite the efforts of the crew and hospital staff, it was not possible to save him and he was confirmed dead at hospital, shortly after arrival.” The police use of Tasers rose slightly towards the end of 2015 with 10,329 uses by forces in England and Wales – a 2% increase compared with 2014.

On top of the world: Usain Bolt wins the 100 meter final

Jamaica’s Usain Bolt has won the 100 meter final, winning a gold medal and defending his Olympic title with ease. Bolt wasn’t so great at the start as he was slow moving out of the blocks. The Jamaican found himself trailing America’s Justin Gatlin at the halfway mark, but never looked like he was being beaten.

Bolt powered home in the closing stages to claim his 7th Olympic Gold at a time of 9.81 seconds. Gatlin managed to win the silver in 9.89 seconds, while Andre de Gras of Canada secured Bronze.

“Somebody said I can become immortal,” Bolt said moments after his triumph. “Two more medals to go and I can sign off Immortal.”