The Vice President of the Southern Cameroons Interim Government, Dabney Yerima says despite its international obligation to abide by resolutions adopted by the UN Security Council, President Paul Biya of French Cameroun is still in violation of the world body’s Resolution 2532, that called on all nations in a conflict to commit to a 90-day cease fire to slow down the spread of the coronavirus.

Dabney Yerima made the statement during a war cabinet meeting on Monday.

“On 1 July 2020, the United Nations Security Council adopted Resolution 2532, calling on all countries in a conflict situation to observe a 90 – day cease fire, to slow down the spread of the virus and to facilitate initiatives to combat the pandemic.

The Resolution demands a general and immediate cessation of hostilities in all situations on its agenda and supports the efforts undertaken by the Secretary-General and his Special Representatives and Special Envoys in that respect;

The adoption of Resolution 2532 has had no impact on the conflict in Cameroon. Since its adoption, there have been numerous attacks, including:

1.1 July 2020: Arson attacks by the military in Banbaki-Tungo, Mezam division in which some houses were burnt.

3.7 July 2020, Military invaded Bakut, in Eyumojck, and killed 2 men and arrested many youths.

The Vice President of the Ambazonia Interim Government stated that the 87 year old French Cameroun dictator has unilaterally pulled his nation out of the international community.

In Southern Cameroons almost all its citizens living in the rural areas and various parts of urban centers have been left to fight the COVID-19 pandemic on their own. The ghost town operations and numerous lockdowns have mounted Ambazonian miseries with many facing starvation due to lack of work and Biya regime apathy.

The Biya Francophone regime in Yaoundé did not actually imposed any lockdown restrictions on Southern Cameroons counties as the number of confirmed coronavirus infections in the two Cameroons keeps increasing on a daily basis.

Due to pressure from the French brewery Brasseries du Cameroun, Yaoundé was quick to open the country again after cases sharply increased. Southern Cameroons largely rural territory abandoned for over 58 years by the French Cameroun political elites has feeble health infrastructure.

Southern Cameroons caseload is on course to hit an unprecedented level, with fatalities approaching a thousand.

Southern Cameroons Vice President Dabney Yerima says the people of Ambazonia and their Interim Government are more than ever before ready for dialog with the French Cameroun government in Yaoundé adding that negotiation is the only way out of existing differences between the two Cameroons.

Vice President Yerima made the comments during a telephone conversation with the leader of the German Ambazonia Think Tank late on Sunday.

“After killing 32,500 of our people, burning down 550 of our villages, forcing 125,000 Southern Cameroonians to become refugees and 1.4 million as IDPs including 3,000 still detained in French Cameroun jails, the Interim Government have tried time and again with our 4 points Amba Agenda to engage in bilateral negotiations with the French Cameroun regime in Yaoundé” Yerima added.

“It is evidently clear that only resistance will determine what perspective Biya and his vicious regime would choose to respond to our proposal to begin dialogue” he added.

French Cameroun President Biya and his backers in Paris, France launched a war against the people of British Southern Cameroons to try and force Ambazonians to remain as second class citizens in La Republique du Cameroun.

In January 2018, the Acting President of the Federal Republic of Ambazonia Sisiku Ayuk Tabe was arrested with 46 Southern Cameroonians in NERA hotel in the Nigerian capital, Abuja by Nigerian Special Forces. They were then handed over to the Biya Francophone regime in French Cameroun – a move that was ruled illegal by a Nigerian court in March this year.

President Sisiku Julius Ayuk Tabe, and nine of his senior advisers were convicted of charges including terrorism and secession and given a fine of $350m (£286m) after an all-night sitting by the French Cameroun court.

The severity of the sentence has failed to stop the bloody conflict playing out in Southern Cameroons between Ambazonia Restoration Forces and the Cameroon government military.

Vice President Yerima, however, said the Ambazonia Interim Government is always prepared to hold negotiations with La Republique du Cameroun as long as they respect the independence of the Federal Republic of Ambazonia.

Several Southern Cameroonians including women and children have fled a Cameroon government assault on Pinyin, prompting warnings of a humanitarian catastrophe in the Northern Zone of Ambazonia.

The Yaoundé regime advance comes amid calls by UN Secretary General for a global cease fire. Cameroon Intelligence Report gathered from eyewitnesses that an attack in the village of Pinyin late on Sunday the 19 of July 2020 killed a baby girl, who was just two months old, and her mother.

By Fon Lawrence in Bamenda

Southern Cameroons Restoration fighters are in complete control of the entire Manyu County except the town of Mamfe, the mayor of Mamfe and a military source said on Sunday, although the Biya regime in Yaoundé said it had control of the area.

In an interview with a local radio station, Mayor Tabenchung Robinson Ashu revealed that Ambazonia Restoration Forces were running the affairs of the entire rural communities in Manyu and that only Mamfe the chief town in the county was enjoying some form of Yaoundé protection.

Cameroon Concord News learnt that recent deadliest assault in Manyu by the Cameroon government army on the Amba fighters has failed to turn the tides.

Troops loyal to the Biya Francophone regime in Yaounde reported that they retook the Ekok border post but said they lost control again and that the Ekok-Mamfe road remained under Amba control. A military source in Mamfe confirmed the takeover.

At the time of filing this report, our correspondent in Mamfe was unable to independently verify who had control of the Mamfe-Ekok road.

The lawyers of jailed Southern Cameroons leaders have called for the dismissal of the case against them and every Ambazonian detained ever since the crisis started as well as their immediate release from French Cameroun government’s captivity.

Barristers Sihm ,Akuwiyadze Joseph , Ndong Christopher, Pekum Emmanuel , AmungwaTanyi, Ndoki Michelle  and Ayukotang Ndep representing President Sisiku Ayuk Tabe and his top aides in a statement read in front of the Kondengui Prison demanded  that all charges against the leaders be quashed, and that they be freed as soon as possible.

The Court of Appeal in the French Cameroun’s Central Region that recently postponed the hearing has not set a date to listen and decide on the demand.

In January 2018, President Sisiku Ayuk Tabe was arrested with 46 Southern Cameroonians in NERA hotel in the Nigerian capital, Abuja by Nigerian Special Forces. They were then handed over to the Biya Francophone regime in French Cameroun – a move that was ruled illegal by a Nigerian court in March this year.

President Sisiku Julius Ayuk Tabe, and nine of his senior advisers were convicted of charges including terrorism and secession and given a fine of $350m (£286m) after an all-night sitting by the French Cameroun court.

The severity of the sentence has failed to stop the bloody conflict playing out in Southern Cameroons between Ambazonia Restoration Forces and the Cameroon government military.

By Rita Akana in Yaoundé

Scores of French speaking Cameroonians, gathered today Friday, July 17, 2020 in front of the headquarters of the European Union Commission in Brussels, the capital of Belgium to call for EU intervention in Cameroon.

The rally, which was staged by several French Cameroun diaspora organizations, was aimed at denouncing the policy of President Paul Biya in Southern Cameroons.

Some of the protesters carried placards calling for an end to the killings going on in Southern Cameroons, reforming the French Cameroun Electoral Code and for President Biya to step down.

The Belgian police were on hand to prevent any excesses.  Tear gas was fired but no major incidents were reported.

The Interim Government of Ambazonia has just been briefed by its legal representatives in Yaoundé that the superintendent of the Yaoundé principal prison has refused them access to their clients- Ambazonian leaders in detention.

The Interim Government is hereby confirming that our legal representatives are currently camped outside the principal prison. Our lawyers on the scene are Barristers Sihm ,Akuwiyadze Joseph , Ndong Christopher, Pekum Emmanuel , AmungwaTanyi, Ndoki Michelle  and Ayukotang Ndep.

On 15 July 2020, our lawyers had taken steps to meet the detention superintendent who accepted their request for a visit to their clients today.  Since 2pm today 17 July 2020, the superintendent’s phones have been conveniently turned off.  Our lawyers have resolved to sleep outside the detention facility if need be. They have reached out to Minister Delegate Momo and La Republique du Cameroun’s head of the legal profession for assistance to no avail.

The Yaoundé regime has increased security outside the detention facility. The Interim Government of Ambazonia has dispatched Barristers Emmanuel Pekum and Ndep Ayukotang to grant interviews to local and international media.

Ambazonia Intelligence Services have intercepted threats and harassments to journalists on the scene from La Republique du Cameroun’s security services.

The Interim Government of Ambazonia is putting the regime in Yaoundé on notice that it is currently monitoring the situation and demands that it makes provisions for our lawyers to visit their clients as soon as practical without any embarrassment.

We are by this statement alerting the International Community and partners of this disturbing and unacceptable violation of international law and conventions.

Southern Cameroons officials in Buea reported that the 50-year- old died today and his next of kin has been informed.

Cameroon Concord News gathered from family sources that the late Ayuk Richard was diabetic. His passing away at this crucial moment in the Southern Cameroons struggle is already pilling pressure on President Sisiku Ayuk Tabe. 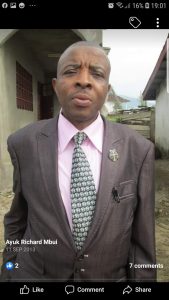 The Ambazonian leader is yet to give his first statement to the people of Southern Cameroons about his late brother.

Sisiku Ayuk Tabe, who was elected Chairman of the Southern Cameroons Governing Council before he became Interim President of the Federal Republic of Ambazonia reportedly, visited his brother when he came home some years ago for his historic initiation into the epke society in Manyu.

Some 63 civilians who were held on Monday in the Lebialem County in Southern Cameroons were released Wednesday night, according to local authorities.

“The armed group released 25 people on Tuesday and the rest of us were released late Wednesday. Some of us who could afford paid a ransom before we were freed. We were maltreated,” one of those who held said but preferred not to be named.

Cameroon government army spokesman said, the abduction was led by a separatist commander nicknamed “general Aekeh” who is “notorious for atrocities against civilians” in the locality.

The 63 civilians who included children and women were abducted at their homes and a bar in Mmouck Leteh, a locality in Lebialem County.

Southern Cameroons have seen a rise in clashes between French Cameroun government forces and armed Ambazonia Restoration Groups in spite of repeated calls by the United Nations for the establishment of a ceasefire amid COVID-19 pandemic.

Since 2017, Southern Cameroonians have been fighting to maintain an independent nation which they established and named as the Federal Republic of Ambazonia.

By Fon Lawrence with files from Xinhuanet