The all time reigning African heavyweight champion was a mainstay on the African wrestling scene for more than two decades and appeared on Guinness Cameroun shows.

The great Super Makia also appeared on the international stage wrestling in Europe, China and in North America and was one of Cameroon wrestling’s best known figures alongside his kinsman the late Eko

Ntuntih News posted a heartfelt message on Face Book confirming the shock news, leading to tributes pouring in from across the wrestling community.

They wrote: “Ntuntih News announce with regrets the passing on of Jacob Mbeng Makia popularly referred to as Super Makia. The Cameroonian heavyweight passed on this morning. The born and breathe kumba boy, who discovered his talent after travelling to Nigeria in the 1980s died at the age of 61 as a fighter turn Hollywood actor and Singer.” 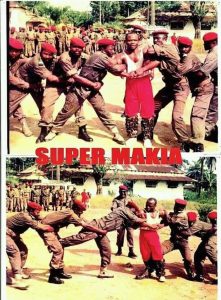 Chief Eyong Paolo of Mulheim an der Ruhr, Germany noted that “Super Makia was our friend. His passing leaves a huge hole in the lives of those who knew him.” He was the lone challenger of Congolese giant the DESTROYER. Super Makia was born on the 26th of February 1958. He fought 86 fights, won 85 and drew 1.

By Soter Tarh Agbaw-Ebai in Mulheim an der Ruhr

Cameroon and the Africa Cup of Nations: The state of play amid coronavirus pandemic

Douala: Family of supposed COVID-19 deceased victim shocked at what they saw

Ambazonia: Interim Gov’t to boost intelligence and self defense cooperation among Amba Fighters